FOR IMMEDIATE RELEASE: The Thin Scrooge Line -- How police, bailiffs, the high court and a mysterious shell company conspired to steal Christmas Dinner from the homeless.

'Twas the night before Christmas, in the High Court of the land,
Where Justice was guided by the invisible hand...
While some with full bellies were nestled in bed;
The homeless and hungry had hopes to be fed....

Just days before Christmas, a group calling themselves the Love Activists occupy a former bank close to London's Trafalgar Square. The squatters are planning on inviting every homeless person in London for a free Christmas Day lunch and say they are seeking new solutions to the city's housing crisis.

But their hopes were dashed on the morning of Christmas Eve. when a High Court injunction was served and a forcible eviction proceeded without notice. "Green Cap Ltd." -- a company about which precious little is known, save that they spent the requisite £9 to be registered in the UK -- through the services of Hamlins LLP of London, were determined that the disused and neglected former bank building must not be employed to give free food and support to the homeless of London, on Christmas Day.

Members of the movement claim the the private bailiffs are attempting to "illegally" evict them from the building, which the activists call "Love HQ".

An activist named Phoenix told The Huffington Post: "They tried to evict us this morning, there's two people on the balcony threatening to throw themselves off. They're pretty upset about the eviction."

"They had a secret hearing Tuesday then came to evict us with about 20 bailiffs."

"All we're really asking for is a warm place to sleep and to cook Christmas dinner for about 100 homeless people."

Police and bailiffs attempted to evict an empty building previously used by Natwest Bank in Charing Cross Road, near to Trafalgar Square on Saturday morning, where activists had established a squat to host Christmas dinner for the homeless.

Despite a long, cold symbolic resistance from the balcony, the occupiers were eventually removed from the premises. However, in the meanwhile, due to the irregular and unfair nature of the eviction, after hearing arguments from representatives of the occupiers, a High Court judge, Mrs. Justice Andrews varied the order to allow the occupiers to re-enter the premises for the purposes of providing the scheduled charitable services. To feed the hungry and homeless on Christmas Day. 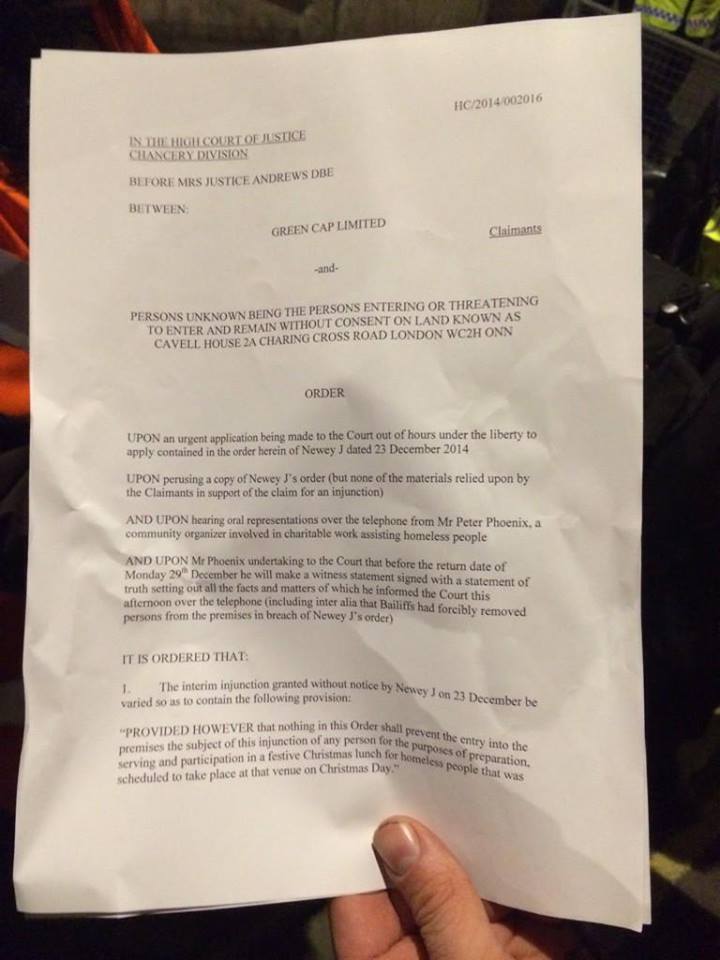 PROVIDED HOWEVER that nothing in this Order shall prevent the entry into the premises the subject of this injunction of any person for the purposes of preparation, servicing and participation in a festive Christmas lunch for homeless people that was scheduled to take place at that venue on Christmas Day.

Jubilant now that their plans were back on track, occupiers attempted to re-enter the building, only to be obstructed by the Met. Police, who refused to acknowledge the order of the High Court, claiming that without a bailiff acting for the occupiers, they could not allow re-entry. Vigilance Properties, the private security firm who were now within the premises also refused to acknowledge the order and obstructed entry in contempt of court.

When efforts were made to inform the operational control of Vigilance that their staff may be acting unlawfully in obstructing the varied court order, they requested a copy of the variation and promptly forwarded it to their clients, who then instructed them to return once again to the emergency night judge of the High Court. Mysteriously, they were able in short order to have the variation completely overturned.

Then it is ordered that:

By the time this strange Orwellian reversal had taken place, occupiers had regained entry to the back yard of the premises, and were keeping in the best spirits possible, hoping that they would be able to resume their preparations to give a decent, warm, Christmas dinner to the homeless.

At last contact, the police and security were preparing to once again forcibly evict them rather than allow a good deed to be done by volunteers for the needy at a time of giving and goodwill amongst men.

The Love Activists will be out tomorrow, providing what they can to those who need it, despite the lack of a building. Their ability to give will be curtailed by this disgraceful conspiracy, but not their will.