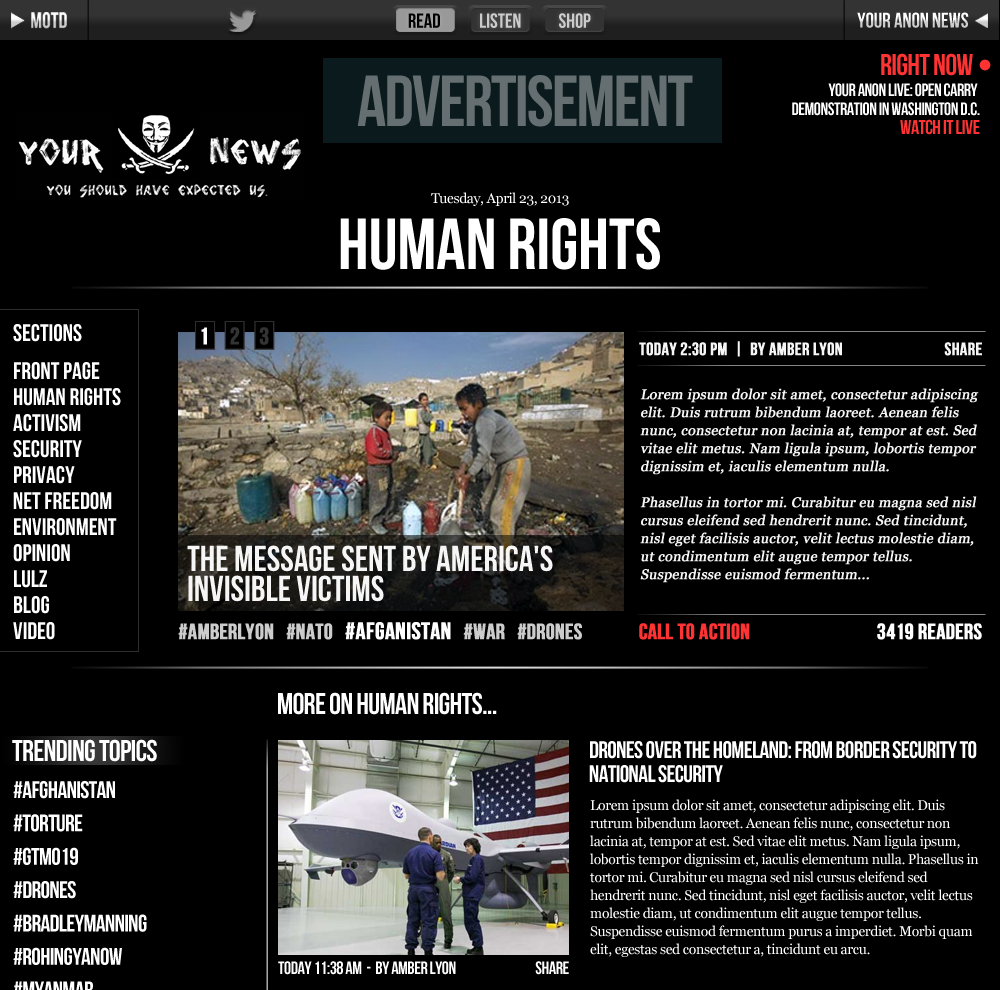 Okay, the preface. For those that are not aware, earlier this year YourAnonNews started a crowdfunding project on IndieGoGo to finance the creation of a new site, as a 'replacement' of sorts for their current Twitter account. They raised $54,638, instead of the $2,000 they set as an initial goal. All this money comes from people that wanted to support this new project. The general impression that people seem to have gotten, was that YAN would be building a brand new website that was more open, more independent, and generally a better fitting platform.

I haven't really talked or cast a judgment about this project before, for the simple reason that despite my historical disagreements with YourAnonNews, that doesn't mean they don't deserve another chance - and frankly, there was not enough information to make a judgment. I've shot off a critical tweet questioning their financial transparency (and was promised that all financial information such as expenses and income would be publicized), but that's about it. Now, in the past 24 hours, a Pastebin appeared, posted by Emmi on her Twitter account. That Pastebin is raising quite some questions and concerns for me - enough to finally write a blog post about it and cast an initial judgment.

On to the actual topic of this post. This post will be in a bit of an unusual format; I will be quoting sections from the Pastebin, not necessarily in the order they appear, and respond to those quotes. There are several concerns, and I'd prefer to raise all of those separately and in-depth, rather than just jumbling together a giant blob of text.

Here is what we have done so far. *Graphically, the website is fully designed, minus smaller pages such as "About" and "Contact". *The server is completely set-up, the software we need is fully installed

Here is what we have left [....] **Finish coding the site. (requires payment, which I will get to in a minute)

To me, this reads an awful lot like they are using a pre-made publishing platform (such as Wordpress), with someone designing/developing a custom theme and some plug-ins for it. That's certainly not the "brand new site requiring a lot of money for development" that I and quite a few others expected to see. In fact, it's something that an arbitrary competent freelancer would probably do for perhaps $300 or $400 through any rent-a-programmer website.

Here is what we have done so far. [...] ** We have aggregation proposals with multiple independent news companies about aggregating their content hassle-free. They're all on board.

This certainly makes me wonder. What "multiple independent news companies"? If "they're all on board", why aren't you just naming them? How does anyone know that they are independent? But alright, benefit of the doubt for this one.

Here is what we have left **We have to populate the site with news. We need 8 stories for each category before launch. We have 8 categories:

Also, undetermined number of videos needed... but all of these are really easy to find.

That sounds a bit like a content farm. And didn't you have a bunch of independent news companies working with you? And a bunch of 'contributors'? What's the hold up?

**We have to train people on how to post to the site. We are in the process of writing up a manual for those who will have access to post.

Wait... so there's just going to be the old model that was also used on Twitter, where there's a very select group of (hand-picked) people, likely to all have a similar bias of some sort (because hey, it's always the same people picking them), calling the shots with no ability for anyone else to post? Why don't you just allow open submissions and moderate them? Is this just going to be yet another closed platform with an 'agenda', just like the current Twitter account is?

**We have a third party shop picked out and ready to go. We just have to weigh the benefits of the additional shipping options. We have created a store design, but we really have to find out how it plugs in to see how customizable the look can be.

Wait... what? A 'third-party shop'? This is starting to sound quite commercial...

** We need to create an LLC and open a bank account in the LLC's name. We are trying to find a community bank with business support if we can, but welcome to company life... we may get stuck with an international financial retard corporation.

WHAT?! Are you fucking kidding me? Why the fuck do you need to set up an LLC? What purpose would there be for an LLC (and not a registered non-profit organization!), other than... going commercial? Whatever happened to "oh, we're doing it to inform people about important stuff because activism"? Is money more important now?

The reason that this website is taking so long to launch. We are dealing with an issue of a cashier's check being lost/stolen from the United States Postal Service. We realize that this form of sending payment was extremely stupid on our parts, especially because we did not certify it. We are newbs. We are learning as we go. We have cancelled the check and are waiting on a report to come in so that we may figure out what is going on. Once this report is in, we will be back on track and we have figured out an alternate, more secure means of paying our programmer who has graciously spent their time putting our requests for this website into hard code. We all should appreciate their efforts, and they will be paid as soon as the report comes in.

Oh, right, the dog ate your homework. Would there have been any worse possible method to send your money across? Was this actually what happened?

We have been bottlenecked by USPS on packaging, getting 1000+ envelopes/boxes is NOT as easy as it sounds and we have been unable to this point to go the amount of USPS offices to collect these.

So why didn't you just make a bulk order for packaging at any random office supply store in your area? Why do you need several months to collect a bunch of boxes and envelopes that any such office supply store would have been able to ship to you within a week?

We have spent over $10,000USD on incentives, more like 13, or 14,000 to be precise. Shit is expensive, and we decided to go with a shirt/sweatshirt printing company that is local and aligns with our causes. Because they were un-used to the volume that we asked of them, just getting these items took nearly a month.

This is probably the only paragraph in the entire Pastebin that sounds remotely reasonable.

We have spent several thousand dollars, the exact amount I am unsure of, getting the server space, software for it, and DDoS protection that will be required to handle a site where we expect nearly a MILLION hits a month. We want to make sure that we have the least amount of downtime probability as possible.

Uhm, what? A million hits per month? And you're presenting that as if it's a lot?

Okay, let's get a bit of perspective here. When, in early 2011, the somewhat famous fake press release about the Westboro Baptist Church was released on AnonNews.org - a site that I run - it received roughly 400,000 hits from 300,000 unique visitors in one day. It slowed down a bit, but held up fine otherwise. At that point I wasn't even using any form of cacheing, just a bunch of PHP with a MySQL database behind lighttpd.

Want to know what kind of server I used at the time? A basic OpenVZ VPS with 512MB RAM and a few hundred gigs of traffic a moment, that you could have gotten at any reliable low-cost VPS host for some $10 a month (at that time).

So for a site that receives roughly 3 times as many hits in a month as AnonNews received in a day (and coped with fine), you need to spend at the very least 100 times as much per month? I'd like to know who exactly you are hosting with, and what you are paying them for. This sounds very, very fishy.

I said, and I will say again, if you are patient I can gather a more precise run down, I personally have not been handling that side of things, but I will now be taking on the role of Support.

I would recommend that you post a full break-down of all income and expenses in the next few days, for everyone to see.

This 'project' is starting to smell more and more like a giant scam. Everything mysteriously goes wrong, exorbitant amounts of money are paid, and with questionable intentions behind the whole project to start with. And even if this isn't a scam, there's plenty wrong with it.

Because, let's be honest - do you really think it's a good idea to have a commercial and for-profit (!) corporation run and control the most-visited news platform for Anonymous (and increasingly, activism in general)? Do you really think that aligns with either the morals or the best interests of the activism community at large?