If you've kept an eye on Anonymous in any way, you have almost certainly come across a particular Twitter account known as @YourAnonNews. This very large Twitter account - it has over 850,000 followers at the time of writing - has become the primary source of news for many media outlets and individuals when it comes to Anonymous. To say it differently, YourAnonNews has become a media outlet themselves. Here's why this is a bad thing.

Twitter is a business. A business, generally, has certain things they cannot do to keep up their reputation or legal liability. While Twitter is most certainly more relaxed than most businesses in terms of, for example, compliance with government requests, they have a certain responsibility in the end. Additionally, it is very important to them to have a good brand image, and exclusive access to the content that is created by their user base - otherwise, what would their business be built on?

To give a more concrete example of this: say you wish to move to a different micro-blogging provider, such as identi.ca. Is Twitter going to give you a full backup of all your tweets in a standardized format? Probably not. Is Twitter going to place a redirect on your Twitter profile to your profile on the new provider? Almost certainly not. It's in their best interests to keep your data and follower base locked up.

This closedness might not seem like a very big issue for an individual writer from some random place on the globe tweeting about the kind of coffee he drinks at Starbucks, but it most definitely is a problem for YourAnonNews, who relies completely on Twitter. As could be seen with the account suspension of YAN, Twitter has full control over the fate of what is currently the biggest media source for Anonymous. The one that holds the keys to the metaphorical YourAnonNews office is not the owner of YAN itself, but Twitter Inc.

YourAnonNews is a closed platform

A bit of history here: YourAnonNews used to be run by one or two people that set it up as a source of news bits about Anonymous. Over time, a few more people got the password to the YourAnonNews account. After criticism over bias and closedness, a new system was set up where GroupTweet was used to give a larger amount of users tweeting access to YourAnonNews - DMing the YourAnonNews account would result in the DM being re-posted on the public timeline, and all posted messages would be logged, including origin.

While at first sight this seems like a more open solution, there was still a big flaw: there were still only one or two people that had complete access over the account. These few people would still be the only people with the ability to add or remove tweeting access for individual other users. Throw some basic psychological bias into the mix, and you end up with the exact same situation as you had before - after all, the owners of the account are more likely to grant access to people that are biased similarly to themselves.

Simply put, as an arbitrary Anon, there is no way to gain access to the audience that YourAnonNews has, unless you are on the "side" of the owners - in which case you would probably not need that access in the first place, as your news would likely already have been tweeted by them. I will elaborate on this a bit more in the following section.

It really is. In part due to what was mentioned in the previous section, there will always be a certain primary ideology speaking from the YourAnonNews account. This is made worse by the fact that there really is no proper way to submit your own things to YourAnonNews.

If you try to submit something via the IRC channel on VoxAnon, you will first have to figure out who has tweeting access, which is not always an easy task, and then hope that you can find the one person with tweeting access that agrees with your desired tweet enough to actually post it. That is, if anyone is responding and in the same timezone in the first place. This clearly doesn't work.

If you try to submit something by DMing or mentioning someone with tweeting access on Twitter itself - if you know who that is in the first place - there is no guarantee that they will ever read your message, nor are you very likely to get a response indicating such. Again, you also have the same problems in finding someone that agrees with your view. This also appears not to work.

So you've come to your wits end, and decide to click the 'website' link on the YourAnonNews profile page on Twitter, and end up at their tumblr page. There's a "submit a press release" link, but this appears to only apply to the tumblr - and who reads the tumblr? The followers are on Twitter, and all the media outlets always refer to the Twitter account as well. Again, there's no guarantee of feedback.

At this point you'll probably just give up, post it on AnonNews and CyberWarNews, and just hope that someone from YAN picks it up. If not, your operation or communication fails, because no one has read about it. The media never picks it up, because it wasn't on YourAnonNews.

To add to the insult, the YourAnonNews account seems, from the name, to be a news account - but frequently, personal opinions are tweeted. Sometimes just off-handed remarks, sometimes very strong accusations.

In a surprising turn of events, the hacktivist group spewed venom against Dotcom using the Twitter handle @YourAnonNews, calling him a snitch. Anonymous has dubbed Dotcom 'master of delusions, illusions and double crossing'.

And it gets worse.

While YourAnonNews does not claim to be an "official" account of any sort, this impression is certainly given by the appearance of the Twitter profile, and the wide referencing in various media outlets. On the account itself, no clear attempt is made at removing this assumption - but how could they, if the closed platform that is Twitter doesn't allow one to change anything on the profile beyond the image and the bio?

The wide assumption that YourAnonNews is an "official" account of some sort can be easily recognized by reading a few news articles about Anonymous.

According to a tweet from Anonymous' mouthpiece account @YourAnonNews, police were notified by the Westboro Baptist Church's lawyer that they would not be attending the funeral.

But more than an hour after its main Twitter account -- @YourAnonNews -- was shut down, Anonymous announced the account had been re-activated in a series of tweets.

Hacking group Anonymous said Thursday it knocked out the websites of the FBI, U.S. Department of Justice, and several entertainment industry sites as retribution for anti-piracy efforts by both the government and the entertainment industry. The group said it was "the largest attack ever," with 5,635 participants involved in bringing down the sites.

YourAnonNews causes a "race to fame"

Aside from all the issues that make YourAnonNews problematic in the first place, there's also one particular issue that makes it hard to solve the problem: everyone wants a piece of the pie. If you are trying to set up an operation of some sort, you will most likely need some press attention. And what better way is there to get press attention, than to try and get tweeted by YourAnonNews?

The desire of people to have their own projects tweeted out, makes it unlikely they will speak out against YourAnonNews or any of its flaws - after all, it could harm their ability to get media coverage. Perhaps ironically, YourAnonNews stays "in power" for the same reason corrupt governments do - everyone is too busy trying to get their share of the power, to speak out against its corruption or flaws in public, thereby perpetuating the problem.

Until is it commonly accepted that these issues exist, YourAnonNews is unlikely to go away, and is in fact likely to grow even more. YourAnonNews already has (almost) all of the characteristics of the so often disliked "mass media", and is already single-handedly controlling the direction Anonymous is going in according to the preferences of those controlling it, through their sheer power in the media.

Closing words, and why creating a new account won't help

All of these problems apply to any kind of news account on Twitter. They are not problems specific to YourAnonNews - it's inherent to the model that YourAnonNews uses. This is also why creating a new account on Twitter with the same purpose won't help the cause and will, in fact, only make it worse by making this model more commonly accepted.

With this post, I hope to make people realize that something is terribly, terribly wrong with YourAnonNews and that it greatly harms the decentralization within Anonymous. Please do share this with others if you can recognize these problems, as I consider it unlikely that YourAnonNews will report on it. If YourAnonNews does tweet this post, then please do realize that that alone, is not enough to make all the problems mentioned above go away. 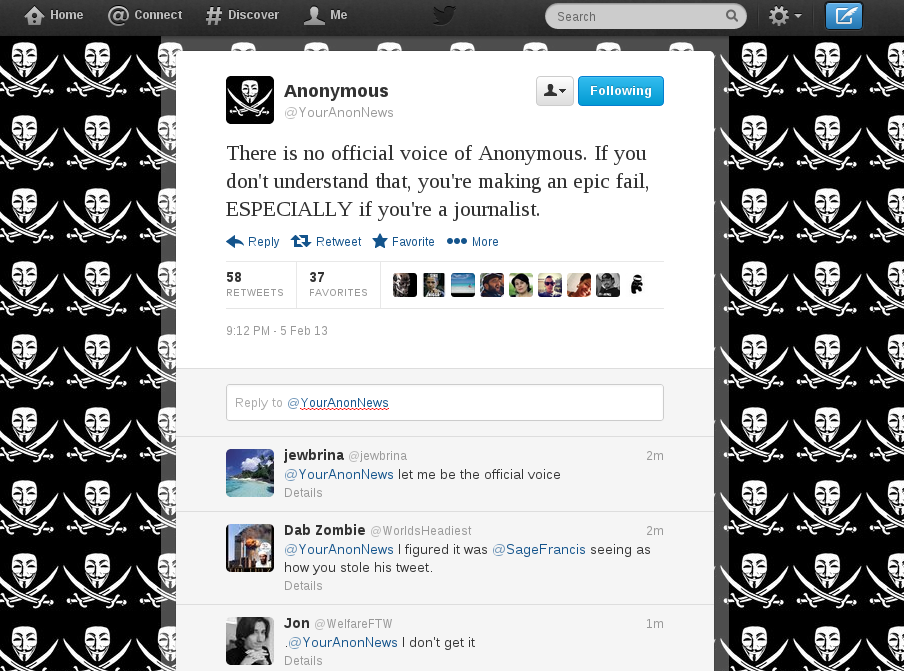 As if the list of reasons itself wasn't bad enough, this was posted by YourAnonNews literally minutes after this blog post was posted in various places, including the #YAN IRC channel. Of course no reference to this blog post to be found, anywhere.

YourAnonNews appears to have just retweeted a reference to this blog post from another account, after publicly criticizing the lack of reference. It appears to be coming from a different user with tweeting access.

We are Anonymous, We are legion, We never forgive, We never forget, Expect us. As official accounts do not exist, we're an Anonymous account amongst many.